It was a beautiful morning today, i was up and ready a little early than usual , had my daily dose of almonds with milk and a quick rush to the friday exercise class at P101. little did i know i would be greeted with food (read starry eyes and watering mouth) by payal and vijayeta…
oh my!
all the exercise and calorie-output got squashed by my love for food!

shaily and vijayeta were the first ones to help themselves… 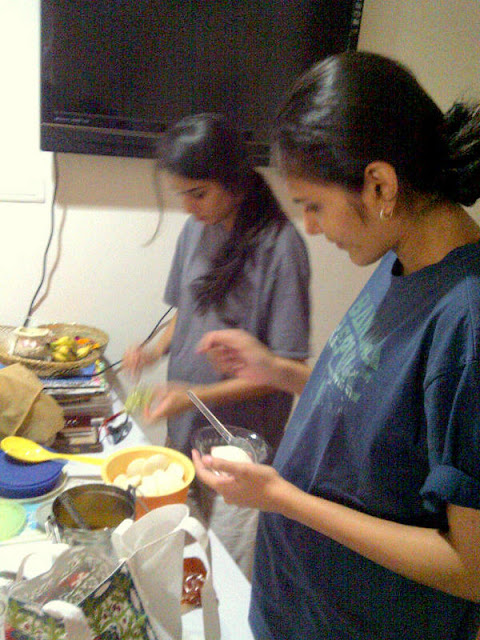 mwaah to Payal Shah who once again created the same khichu magic she did the last time here. this time i got the recipe too 🙂 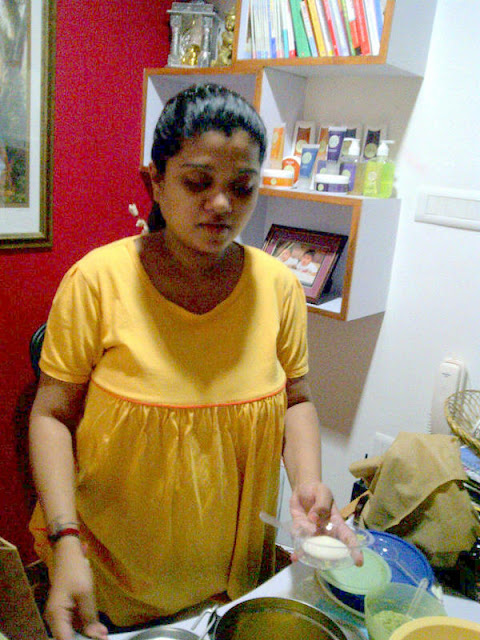 who can resist those cute idlis (as shruti calls them); the chutney and sambhar were irresistible too… wish they were piping hot as well… but hell! who needs steamy food when we have hot ladies around!

as we all indulged in idli-sambhar-chutney and ‘world famous’ khichu (as Rita calls it) i kept an eye on what Vijayeta had brought for us.
Dangeedums is a pastry shoppe i had heard about, never tasted its delicacies since its not near to my place… the good thing- my friend here (in the pic) got it for me 🙂

don’t these babies look like they need to be eaten away right NOW???
killer look!

with due respect to the exercise i just had… i had only half of it… though i could not resist and had two spoons of the other half resting in the left corner later. (punch me on the face for all those calories!!)

by the time i cleaned my bowl of every delicately baked morsel.. i went burrpp… it was full house inside my tummy.. no space for lunch so i kept it simple. (a small) coconut water… wish it was chilled :/

and my gooseberry (replacement for vitamin C) with some iron and calcium’s before i left for work.

what awaited me at the workplace??

a huge juicy gulab jamun with cardamom seeds and lots of sugary syrup oozing out! a colleague got it for me… could not say ‘no’ to her.

what a day it has been… the rest of the evening has been planned to be calorie free… only IF that happens… fingers crossed… i am too stuffed for anything today.. munching on one more gooseberry while i write this post.

what has been your greatest indulgence by now?

8 thoughts on “the Burrp ! Brunch”